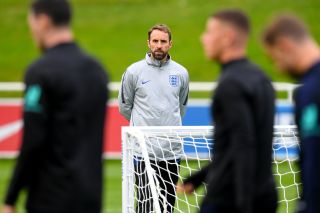 Gareth Southgate has hinted he may look to play with a back three when England face Denmark in the Nations League on Tuesday night.

The Three Lions head to Copenhagen on the back of a narrow 1-0 victory over Iceland on Saturday.

Southgate opted for a flat back four in Reykjavik as Kieran Trippier filled in at left-back and Eric Dier dropped in to partner Joe Gomez in the heart of the defence.

Here it is: your #ThreeLions team for our first game of the year! pic.twitter.com/FmKAmco4qt— England (@England) September 5, 2020

That could change next time out as Southgate looks to keep his options open moving towards next summer’s European Championship.

Trent Alexander-Arnold is expected to replace the suspended Kyle Walker on the right, while late call-ups Conor Coady and Ainsley Maitland-Niles both suit a formation with three centre-backs.

“We’ve tried things in training across the week with a long-term view on different possibilities for us as a team,” said Southgate, who used a back three throughout the run to the 2018 World Cup semi-finals.

“Whether that is the right thing for tomorrow night to be able to win the game we’ve got to think that through, but it is no secret, because everything in this camp seems to have got out.

“So we have tried a three at the back earlier in the week. But we’ll make a decision on that tomorrow.”

With Phil Foden and Mason Greenwood both returning home having breached Covid-19 protocols after making their debuts against Iceland, Southgate’s squad is down to just 19 outfield players.

At this stage of their pre-season preparations with their club, it could be difficult for Southgate to juggle the balancing act of not burning out his players while also aiming for back-to-back Nations League wins.

“We’re actually really pleased with the condition of the players following the Iceland game,” he said.

“I think it was a game that was played in predominantly one half of the pitch so the physical demands are a lot lower than the matches sometimes can be.

“Of course, there have been players in our squad short of training minutes and match minutes but in actual fact, everybody has reported well both before and after training.”

While Iceland looked to defend for large periods of Saturday’s game, Denmark are more likely to set about England.

The Danes lost 2-0 at home to Group 2 rivals Belgium at the weekend but Southgate still expects a sterner challenge than last time out.

“I think it will be a very different style of game,” he added.

“Denmark were very good against Belgium, I thought they were very unlucky to lose the game. They pressed with intensity, they’ve got good quality players with the ball.

“So we’ll have a different sort of test defensively, and we’ll come up against some very good defenders as well but there will be a little bit more space because of the way Denmark play.

“Iceland obviously were very low block, a sensible approach for the way that they needed to play the game, but Denmark will come at us a little bit more and there will be a little bit more space for our attacking players.”