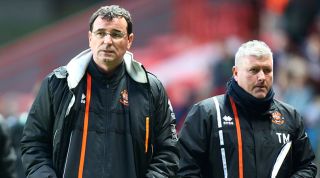 Bradford have appointed Gary Bowyer as their new manager.

The former Blackburn and Blackpool boss, 47, has agreed an initial deal to take charge until the end of the season and replaces David Hopkin, who resigned last week after less than six months in the job.

Bowyer, who has been out of work since leaving Blackpool in August, will be assisted by Andy Todd – the son of former City manager Colin Todd.

“I am absolutely delighted to be here. This is a massive club and the opportunity to manage Bradford City doesn’t come along that often. It was one I had to take,” Bowyer told the club’s official website.

“I have been ready to get back into management for a while but it’s been about getting the right opportunity. This is a fantastic one for myself and for Andy.”

Bradford are currently 23rd in League One and six points adrift of safety, but Bowyer said: “We are totally aware of the challenge that lies ahead but if I didn’t believe we couldn’t get out of this, I wouldn’t be here.

“That’s the most important thing. We have belief in the players and we are going to work very hard from now until the end of the season and concentrate on the games we have left.

“We will outline our demands to the players and what is expected from them. They are going to have to work very hard, stick together and have a right good go. As long as they do that, we will see where that takes us.”

Bowyer is Bradford’s third manager this season. Michael Collins was sacked just six games into the 2018-19 campaign and Hopkin left last week after 28 matches at the helm.

Martin Drury took caretaker charge against Portsmouth on Saturday as the Bantams were beaten 5-1 at Fratton Park.