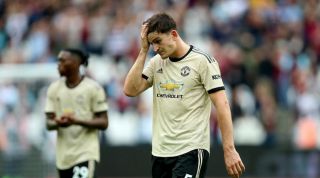 Gary Neville has called for the Manchester United board to keep faith with Ole Gunnar Solskjaer’s plan to restore the club to its former glories.

A 2-0 defeat by West Ham on Sunday means United have won only two of their first six games of the Premier League season.

Solskjaer’s side are already 10 points adrift of first-placed Liverpool, who have amassed 18 points out of a possible 18 so far.

The Norwegian, who is attempting to make United title challengers once more, targeted younger British players during his first transfer window in charge.

And although Neville predicts there will be “lots of pain” ahead for United, he has called on the club to stick with Solskjaer's approach.

“Ole Gunnar Solskjaer will realise it was a poor performance at West Ham and know there's a lot of work to do at the club. He'll have known that anyway,” the former United defender told Sky Sports.

“I'm not panicking as a fan. I'm frustrated but not panicking. What I would say is they have to quickly and efficiently identify three or four players to go alongside [David] De Gea and [Harry] Maguire.

“They need a couple of midfield players, they need a striker to carry the front line, they need a wide player and they need a left-back. You can't kid football fans. There are five or six players required.

“They have to be the right type and that might take 18 months because they might not be able to get the players they want.

“Your job as an owner or board is to supply the manager with players who can win and Manchester United have not done that for eight years now.

“They've put the money in but they've not put the strategy around it. If they'd have had the methodology eight years ago of stick to young, emerging English players, they'd probably be in a good place now, but they jumped off the David Moyes, Louis van Gaal and Jose Mourinho tracks.

“They can't jump off the Solskjaer track. They have to support the manager and find a way of signing players.”

United host Rochdale in the third round of the EFL Cup on Wednesday, before a Premier League meeting with Arsenal on Monday.