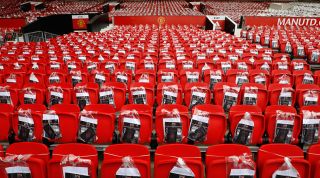 For their many faults on the pitch over the last six years, Manchester United have been engaging with fans who are keen to improve the atmosphere at Old Trafford.

The club accelerated the atmospheric decline by putting a section of executive seating in the vocal heartland of the Stretford End in 1993, but there have been successful measures to undo some of that damage in recent seasons. They had to, since Old Trafford’s atmosphere – along with other big top-flight English grounds – went from being one of the best in the world to being roundly slated.

Collaborating with fans’ group The Red Army is paying dividends – their section in L stand on Thursday against Astana was the highlight of the night along with Mason Greenwood’s goal. The Red Army have been given a block of 1,000 seats in the Stretford End this season to fill with people who are prepared to make some noise – that too is working. And the team need all the support they can get right now.

The club have also long been keen to see rail seats at Old Trafford – as found in many German grounds. These can be flicked to act as seats or provide a barrier to lean on when fans stand. United hope to plan for a rail seat trail at Old Trafford. In 2013, Ed Woodward told me: “Standing is something we’ll look at (at Old Trafford). I can definitely see the appeal of the German model, Dortmund being the standout model in that their ticket prices are very reasonable.”

Legislation didn’t allow it, but after a recent change in the stadium safety guide – ostensibly to deal with the issues of persistent standing – the club are carrying out a detailed feasibility study. United don't yet know where the trial will be inside the stadium, and there are always issues when fans are moved from their regular seats. Wolves and Tottenham have already installed rail seats in sections of their stadiums, where fans can stand and lean against a barrier – or sit.

Standing at football matches in England’s top two divisions remains illegal and clubs are still expected to enforce the all-seater policy. The guide says that clubs may only look to “install seats incorporating barriers or independent rails in areas where persistent standing continues to take place… only once all other measures have been tried.”

The reality is that fans stand for long periods, especially away. It’s more dangerous to stand with no barrier in front than not. Seats are placed on a steeper rake than most terraces – and that’s a steeper stand to fall down in moments like a goal celebration. A rail can make a section safer.

Fans have long been campaigning for safe standing: a petition presented to the government in 2018 got more than 100,000 signatures from UK voters, which led to sports minister Tracey Crouch commissioning a review into safe standing.

Bristol City and Union Berlin fan Jon Darch is one of those who signed. Having seen close up how it works in Germany, he has long advocated rail seating and took his Safe Standing Roadshow around the UK from 2012 for clubs to look at. For years he met deaf ears, but his persistence is paying off.

When I spoke to him after a United victory at Anfield (those were the days), during which some fans had fallen over the seats in front, he said: “Had there been rail seats at Anfield, fans would have been safer with the late winning goal. They could have celebrated to their hearts’ content, but they wouldn’t have fallen over the seat in front. Standing behind a low-backed seat is not incredibly dangerous but can result in bruised shins or falling forward over rows.”

United fans stand at every away game and the authorities don't like it, meaning ticket allocations get cut at grounds like Anfield. It means fans on the last two rows of a stand originally designed for standing and then converted to seating in 1982 can’t see properly. It’s far from ideal, but obviously the concerns about the safety of standing must be allayed properly because of the lessons from Hillsborough.

MUST, United’s supporters trust, said of the club’s move: “We have fought long and hard for safe standing for many years. We believe it will likely benefit atmosphere but also enhance spectator safety in areas where fans already persistently stand.

“As a supporters' group, naturally supporter safety is our number one priority, so we hope that this added safety measure is put in place sooner rather than later. Every game that passes without rail seats in place to prevent fans at Old Trafford getting injured falling over the existing conventional seats is an opportunity missed to make the stadium a safer place.”

These are baby steps in the right direction.

"If someone mentioned finishing fourth as a great achievement, they'd have been lynched" – Roy Keane warns Ole Gunnar Solskjaer

In Germany, there are standing areas which can hold up to 20,000 fans, the most famous being Dortmund’s Yellow Wall. The larger capacity from standing areas helps lower ticket prices, though for European games every fan must have an allocated seat.

In Scotland, the vocal and colourful Green Brigade have been a success standing in a section of 2,600 rail seats at Celtic Park. This isn’t about a return to Kop-like terraces with swaying masses stumbling around, but safer areas where fans can stand.

The authorities have been slow to react. The Premier League were long reluctant to even discuss it, but when the Football league sent a letter to their 92 member clubs in 2014, 75% of them replied ‘yes’ to the question: “Do you want us to go to government to ask for a debate on safe standing?”

There has been movement since and it’s an important one. The Premier League has been a huge domestic and international success. Most of the people who watch games don’t go to them and safe standing is not a key issue.

But for the millions who do and sell out football grounds every week, the ability to have a choice – the long-term goal of standing, paying less and improving an atmosphere which can sometimes be too sanitised – remains important.