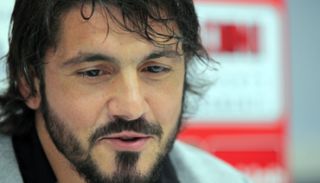 Gattuso, a notoriously hard-tackling midfielder who joined the club as a player at the start of the season, had taken on the role of player-coach in February but managed only 10 points from 11 league games and suffered a cup elimination at the hands of FC Basel.

Sion said in a statement that he would be replaced by under-21 coach Michel Decastel, who will take over the senior side for the second time this season.

In addition, eight players were also demoted to the reserve squad and replaced by eight from the under-21 side.

Sion did not name the eight and it was not immediately clear whether Gattuso was among them.

Sebastien Fournier started the season in the hot seat and was replaced by Decastel in September. He was followed by Pierre-Andre Schuerman, Spaniard Victor Munoz and then Gattuso.

Despite the chaos, Sion are fifth in the 10-team Swiss Super League and could still qualify for the Europa League next season.

Eccentric club president Christian Constantin has employed around 30 coaches since taking over for a second stint in 2002. An architect and former goalkeeper, Constantin has appointed himself as coach on two occasions.

Last year, he led the club into a legal battle with European football's governing body UEFA after Sion were kicked out of the Europa League for fielding ineligible players.

Sion lost the battle, were docked 36 points in the league but escaped relegation because another club, Neuchatel Xamax, were expelled due to financial irregularities.