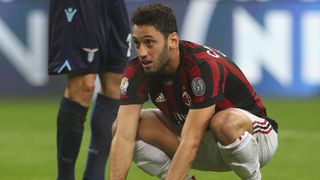 Gennaro Gattuso revealed attacking midfielder Hakan Calhanoglu was distraught in the locker room after his inexplicable miss in the opening leg of the Coppa Italia semi-final against Lazio.

Calhanoglu missed an open goal in the second half as Milan played out a scoreless draw at home to Lazio in Wednesday's first leg.

The unmarked Turkey international fired over the crossbar from point-blank range after Patrick Cutrone had his header saved with 15 minutes remaining.

"We have to improve our finishing, although admittedly we didn't create much," head coach Gattuso told Rai Sport.

"Calhanoglu was distraught in the locker room at his miss, as he wanted to score at all costs."

"The first half was played at a very low tempo and we struggled to get going," Gattuso said.

"We did much better after the break. We're happy, as Lazio are an excellent squad and very difficult to face. We knew it was going to be a battle for 95 minutes.

"The important thing was to keep a clean sheet, because our goals in the second leg will be worth double.[Goalkeeper] Gianluigi Donnarumma performed a miracle save, otherwise we'd have gone a goal behind."

Milan goalkeeper Gianluigi Donnarumma was on hand to deny Lazio's Ciro Immobile with a great save at San Siro, where the visitors enjoyed the better chances.

"We should've been sharper in front of goal. I am very happy with the performance, so there are regrets over the result," Lazio head coach Simone Inzaghi added.

"We dominated the match for 70 minutes, then the one time the ball fell into the box and we risked losing. We ought to do well in the home leg."