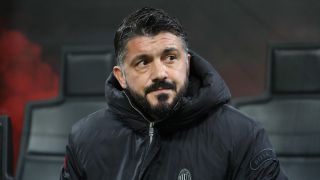 Gattuso's position has been a source of speculation for much of his first full season in charge and he narrowly avoided a fresh wave of scrutiny thanks to a come-from-behind 2-1 defeat of SPAL last month.

The Rossoneri had failed to win any of their previous five matches in all competitions and remain a point adrift of Serie A's top four.

Though coaches of the calibre of Arsene Wenger and Antonio Conte have been linked to Gattuso's post, Shevchenko - a Champions League winner with Milan - is staunchly in his former team-mate's corner.

"It is important to keep supporting Rino, because he's giving the team an identity and a sense of belonging," Shevchenko told La Gazzetta dello Sport.

"He's the right man for this Milan. I'm happy that the club is keeping faith in him.

"I like this attitude of the club. There are people who have clear ideas, who are not shaken in times of difficulty. [Sporting director] Leonardo and Paolo Maldini are working calmly and competently.

"With Leo, Paolo and Rino, we're in good hands."

Milan's victory over SPAL came courtesy of Gonzalo Higuain's second-half goal, the striker's sixth of a difficult Serie A campaign and first since October.

31 - Gonzalo #Higuain has found the net 31 Serie A shots after his previous one (in October against Sampdoria). Awakening. #MilanSPALpic.twitter.com/qz4Y0QBVyU— OptaPaolo (@OptaPaolo) December 29, 2018

Shevchenko, now in charge of the Ukraine national team, believes Higuain will come good as the heightened expectation around his off-season arrival from Juventus wears off.

"There is so much pressure on him and he has been unlucky," the former Chelsea and Dynamo Kyiv star said.

"Since the beginning of the season, Higuain has been treated as the star signing with all eyes on him.

"He's a great player and is playing with his future, because if Milan qualifies for the Champions League he can stay at the club and prove that he cares about it.

"He just needs to stay calm during difficult times, like everyone else in Milan. There are tough times in football, but they always pass."