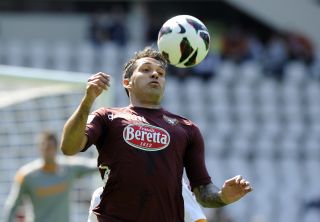 The former Napoli and Fiorentina man joins the Portuguese strugglers after making just six Serie A appearances this season.

Genoa confirmed on their website that the 32-year-old, out of favour under Gian Piero Gasperini, had made the move to the Estadio Jose Arcanjo.

"Genoa CFC can confirm that Mario Santana will join Olhanense on a temporary basis," read a statement.

Santana will link up with fellow Genoa team-mate Mario Sampirisi, who joined Olhanense on loan until the end of the season earlier this month.

Olhanense have been active in the transfer market of late, also bringing in former Fiorentina and Udinese midfielder Christian Obodo from Dinamo Minsk.

Giuseppe Galderisi's side sit 15th in the table, having won only three times in the league this season.