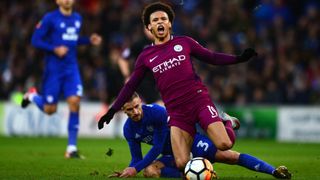 Fears over the robust treatment Germany duo Leroy Sane and Ilkay Gundogan suffered during the first half of Manchester City's FA Cup tie at Cardiff City prompted a Twitter response from their national team.

Goals from Kevin De Bruyne and Raheem Sterling gave the Premier League leaders a healthy 2-0 advantage in the fourth-round clash in the Welsh capital but it came at a cost.

Sane was substituted at the interval after being scythed down by Joe Bennett – the Cardiff full-back catching the winger on the ankle with a rash sliding challenge.

Gundogan had earlier received lengthy treatment having been brought down by Joe Ralls in the incident that lead to De Bruyne converting the opener from an eighth-minute free-kick.

Before the second half got underway, a tweet from the Germany team account tagged Cardiff and offered a gentle reminder of Sane and Gundogan's World Cup commitments in Russia later this year.

Hey, . Just letting you know, we have a really important tournament in the summer. Please don't hurt our players. Thanks,  January 28, 2018

It read: "Hey, @CardiffCityFC. Just letting you know, we have a really important tournament in the summer. Please don't hurt our players. Thanks, #DieMannschaft #inSane"

Germany have been drawn alongside Mexico, Sweden and South Korea in Group F for their World Cup defence.