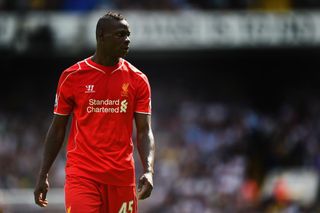 The Italy striker, signed from Milan last week, missed two good headed opportunities early on but linked up well with Daniel Sturridge and Raheem Sterling before being withdrawn just after the hour.

Sterling, Gerrard and Alberto Moreno were on the scoresheet in north London, but it was Balotelli who caught the Liverpool skipper's eye.

"If he plays like that for us every game, he'll continue to improve and he could be the difference as to whether we compete or not."

Balotelli arrived at Anfield with a fair amount of baggage from his previous spell in the Premier League with Manchester City, but Gerrard had nothing but praise for how he has behaved so far.

"To be honest, I don't really have an opinion of people until I work with them myself and he's been terrific since he came in - he's worked hard, he's taken all the tactics on board of how we play with and without the ball," added the 34-year-old.

"He'll only improve with a manager like Brendan. He's seen how the rest of the lads work and behave and he'll have to follow suit - that's his only option."