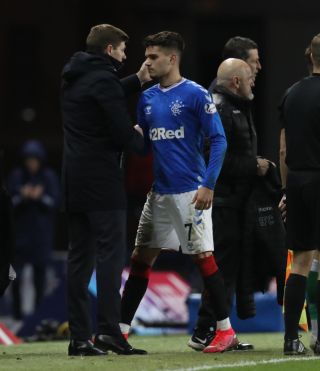 Gers were in danger of seeing title rivals Celtic disappear over the horizon as they struggled to breakdown Hibernian at Ibrox.

Paul Hanlon had fired Jack Ross’ Leith outfit ahead but while George Edmundson levelled just before the break, frustration soon grew amongst the Light Blues faithful the longer their side went without a second goal.

But all those fears were washed away as on-loan Genk ace Hagi – son of the former Real Madrid and Barcelona star – fired home his first goal for the club with a sublime first-time finish six minutes from time.

Gerrard was delighted to see both father and son have reason to celebrate on Gheorghe’s 55th birthday.

He said: “Ianis is a top talent. I said that when he arrived.

“We picked a very bold and ambitious line-up for a reason, because we were looking for creativity and a spark in the final third.

“I thought his performance grew as the game wore on. In the first half he was getting used to the game in Scotland, people knocking him about.

“Second half he was much stronger. He’s a brave player. He’ll receive the ball in any situation, in any area of the pitch. Even if he makes a mistake, he won’t shy away.

“His second half performance deserved to win the match. He was outstanding. I was actually shouting at him to take a touch, so it shows what I know.

“It’s his dad’s birthday as well so it’s a nice moment for him.”

Gerrard admitted Gers were lacking creativity in the final third after seeing them slip-up against both Hearts and Aberdeen.

They remain seven points behind their Old Firm rivals with a game in hand but the Ibrox boss was delighted to see his side get their rewards for a dominant display against Hibs.

“We got out of the game what we deserved. The second half performance was lot more like us.

“We got frustrated in the first half and tried to complicate things. We could feel the groans and frustrations of fans. I asked the players at half-time to lift the crowd and get back to the performances from earlier in the season.

“We deserved to win by more. We were the ones creating chances.”

Edmundson also opened his Rangers account after making just his second league start since his summer move from Oldham and Gerrard added: “George certainly deserved a go. He’s been very patient and trained very well. It was a terrific finish on his left foot. I’ve not seen many of them from him in training.”

Hibs clung on to their place in the top six despite suffering their third defeat of the season to Rangers.

Ross said: “Before the game I spoke about us wanting to be more competitive than we had been against Rangers in the previous two games this season – and we were.

“I was proud of the effort. We were resolute, disciplined and hard working.

“It’s hugely frustrating not to take anything from the game. But there were a lot of positives.”