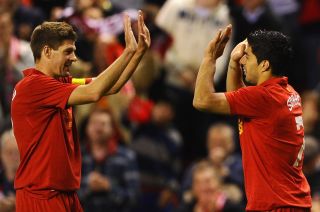 Suarez has been a controversial figure since joining Liverpool from Ajax in 2011 as he was involved in a race row with Manchester United's Patrice Evra and received a 10-game ban for biting Chelsea's Branislav Ivanovic at the end of last season.

That suspension meant the prolific striker missed the opening seven games of the current campaign, but he has hit the ground running since his return, scoring six goals in five Premier League matches.

And Gerrard believes the Uruguay international is the best team-mate he has had at Liverpool.

"The only player who comes close to producing what Luis has done in a red shirt is Fernando Torres — but Luis just pips him."

Gerrard, though, is fearful of losing Suarez at the end of the season if Liverpool fail to qualify for Europe after the forward was the subject of rejected bids from Arsenal earlier this year.

"Luis is in good form," he added. "The team are playing well, so (losing him in) January won't be a problem.

"But come the summer, I think depending how Liverpool have done will determine what goes through Luis' mind.

"His goals, his performances and his form will be the key to whether we finish in the top four."

Suarez has scored 57 goals in 102 appearances for Liverpool and will hope to add to that tally against Fulham on Saturday.