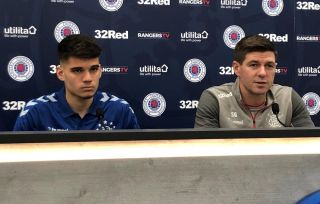 Rangers boss Steven Gerrard has urged the club’s faithful not to expect new signing Ianis Hagi to hit the heights of his father.

The Romania international is son of former Real Madrid and Barcelona icon Gheorghe.

The man dubbed “The Maradona of the Carpathians” lit up two World Cups and is regarded as one of the best players of his generation.

But Gerrard does not want to heap unnecessary pressure on his offspring as the 21-year-old prepares to make his debut against Aberdeen on Saturday following his loan arrival from Genk.

Gerrard said: “I’m delighted. We’re talking about one of the best talents in Europe at Under-21 level.

“He’s a player with huge potential so to finally get it done late last night was very pleasing.

“I think we have to be patient. He’s only had one session with the team. We’ve only had a couple of opportunities to show him what we expect in and out of possession.

“He will come into the squad with caution. I think everybody has to be patient.

“We’re all aware of the name on the back. I’m sure he will continue to do that name very proud, but it’s important people don’t expect his old man to walk through the door and to produce performances like he did in the World Cup, which got me off the couch.”

Hagi senior is no stranger to Ibrox, having been part of the Steaua Bucharest team which dumped Graeme Souness’ Light Blues out of the European Cup at the quarter-final stage in 1988. He was also part of a Galatasaray side which claimed a goalless Champions League draw in Glasgow in 2000.

Ianis has heard all those stories but feels no extra pressure to live up to the family name.

The 10-cap Romania international, who made an 8million euro (£6.7m) switch to Belgium just last summer, said: “One thing for sure is that I’m proud to wear this name.

“It’s a pressure I was born with so I’ve got used to it. I use it as a motivation to get better.

“It’s a great honour to be here at this club with these amazing fans and huge history. I couldn’t decline the opportunity to work with the coach and this amazing team.

“My father told me about the games he played at Ibrox and many things about this club. I already knew a couple of them. I know what kind of club I’ve joined and I’m really proud to be here.”

Gerrard admits one of his biggest regrets is missing out on the chance to go toe-to-toe with Hagi the elder for England at Euro 2000.

But he is excited by the prospect of working with Ianis, who scored three goals in 19 appearances for Genk and shone at last year’s European Under-21 Championships as he netted against England and Niko Katic’s Croatia.

“I should have played against Gheorghe at Euro,” Gerrard said. “I was meant to start against Romania but I had a calf problem so unfortunately I never got the chance.

“We’ve tracked Ianis for some time. We followed him during last year’s youth Euros but at that time we weren’t in a position to compete with Genk.

“But the change of manager made our eyes open wide and we enquired. As soon as we knew there was a possibility, we jumped all over it.

“I watched the game he played at the Euros against Croatia. I was watching Niko but Ianis had a fantastic game. I think he’s already reminded Niko of that day. I’ve told him to be careful in training because Niko is a man with a decent memory.”