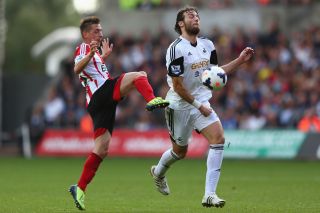 The Italy midfielder will get his first taste of a derby against Sunderland's arch-rivals Newcastle United this weekend.

Giaccherini has plenty of big-game experience from his time at Juventus and playing for the national team, and he is relishing the prospect of facing Alan Pardew's side in Gus Poyet's first home game in charge.

He told the Shields Gazette: "I know about the derby game – I know it is like Roma v Lazio, not Inter Milan v AC Milan.

"In the Milan derby, both sets of fans really want to win but if they lose they shrug and move on.

"In Rome, whichever side loses the derby, it is very bad, and I know that that is what it is like here.

"The fans should know that new players at Sunderland are quickly told how important the derby is.

"But I have played in derbies before and I understand what they are all about."

Sunderland are bottom of the Premier League with just one point from their first eight games and Giaccherini believes a victory could finally kick-start their season.

"I am looking forward to the game and every Sunderland player must do the same because we need to be completely focused on getting a win which would do a lot to change the mood and get the club going," he added.