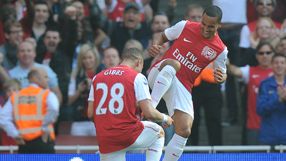 Walcott has continued his recent good form with goals in the Gunners’ 3-0 win over Aston Villa and 2-1 defeat to Queens Park Rangers, taking his tally for the season up to 10.

Gibbs, who also got on the score-sheet with his first ever league goal for Arsenal against Villa, says Walcott’s form is the result of his professionalism and hard work.

"He is a model pro, takes his work really seriously and is a really nice guy," he told the club's official website.

"For me, yes [he is the best winger in the country]. Put it this way, I wouldn't like to be coming up against him.

"I looked up to him quite a lot when he first came to the club, it is a pleasure and a joy to play with him. He is an outstanding player."