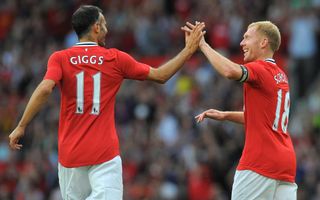 Giggs was appointed in a caretaker role on Tuesday after David Moyes was sacked less than 12 months into his six-year deal.

And with Saturday's home clash against Norwich City fast approaching, Giggs called on Scholes to help prepare his side in Wednesday's training session.

Former United team-mates Nicky Butt and Phil Neville – who are on the club's coaching staff – were also present at the club's Carrington training complex.

Butt coaches the club's Under-19 team and Scholes has assisted in their European campaign.

Neville remains part of the club's first-team staff despite the departure of Moyes, who he also worked with at Everton.

United are languishing in seventh in the Premier League table, 23 points behind table-toppers Liverpool.

Sunday's 2-0 defeat at Everton extinguished their UEFA Champions League hopes but fixtures against Norwich, Sunderland, Hull City and Southampton should see them end the season on a high.