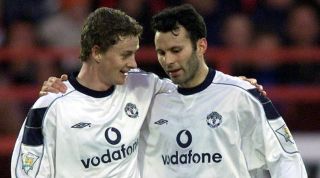 The Norwegian was handed the reins on a caretaker basis following Jose Mourinho’s sacking in December and has enjoyed a dream start, leading his side to seven consecutive victories.

Sixth-placed United are now just three points adrift of Chelsea in fourth, while they have also set up an FA Cup fourth-round clash with Arsenal and a Champions League last-16 tie against Paris Saint-Germain.

The Welshman, who had a spell as interim United boss at the end of 2013/14, thinks that Solskjaer will put himself at the front of the queue to become the next permanent manager if he continues the momentum.

"I think he does need a longer run, but he's making a brilliant case for it," Giggs told ESPN FC.

"And if he carries on then why not, because he's got that experience with [assistant] Mike Phelan coming in as well.

"The whole place has had a massive lift, so if you can keep that, it says something.

"But he'll probably have to finish in the top four and do well in the FA Cup or the Champions League, and then it would be very hard for him to not get the job."

Manchester United face Arsenal in the FA Cup fourth round at the Emirates Stadium on Friday night.

In 1999, Giggs scored arguably the competition's most iconic goal of all time in the same fixture at Villa Park to help his side into the final.

“It probably doesn't seem that long ago," he reflected. "When the FA Cup comes around, a lot of people want to talk about the goal.

"In '99, it was two teams who would grace any Premier League season because of the teams that they had - the managers, the individuals, they both played football, they both got stuck in.

"That was probably one of the toughest sides that I've ever faced. We're not quite there yet with both teams, but they're showing signs of improvement.

"Both teams are huge clubs, with a massive rivalry and I'm looking forward to watching the game."