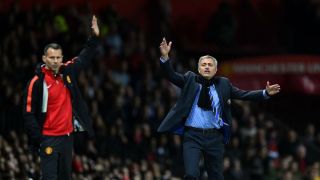 Jose Mourinho insists he was not behind Ryan Giggs' departure from Manchester United, claiming the Old Trafford legend left because he was not offered the manager's job.

Giggs brought a glittering 29-year association with United to an end on Saturday, quitting his job as assistant manager and outlining his plans to take a top job elsewhere.

Mourinho has reportedly turned down the chance to employ former winger Giggs as his right-hand man, instead preferring long-term lieutenant Rui Faria.

"With Ryan, I want to make it clear," Mourinho told reporters at his United presentation. "The reality is that it is not my responsibility that Ryan is not in the club.

"The job Ryan wanted is the job the club decided to give me, it's not my fault.

"Ryan wanted to be Man United manager and the club, only they can tell you why they decided the job was for me.

"From this moment, Ryan wants to be a manager."

Mourinho drew parallels between Giggs' decision and his own step into management, before backing the Welshman to make a return to his boyhood club in the future.

"Sixteen years ago, I decided myself I want to be a manager. Many of us start as an assistant and for many of us arrives a moment where we make a decision and Ryan made decision.

"When you say I offered him a job, he could be whatever he wants in the club, the club want to give him any important job in the club.

"He made a decision, a decision where you need to be brave.

"It happened with myself. I was in Barcelona in 2000, I had a contract for two years to be assistant.

"You think it was easy for me to be at a big club with stability and go to a new fight? It was not easy and for Ryan it's not just a step of going from assistant to manager.

"One day, if he wants to come back while I'm here, I will never stop him I will always say yes if the cub asks my opinion. And if the club offers him the chance to become the manager it will be natural and a consequence of his managerial career."

Another Old Trafford icon set to run his eye over Mourinho's reign is Alex Ferguson - the greatest manager in British history and a former foe of the Portuguese.

"Ferguson told me to bring an umbrella," Mourinho dryly added. "That was great advice.

"And he told me to bring my favourite wine. We will be together a lot. He is on a bit of a holiday now, so we won't meet this week.

"But once he returns, we will have a lot of time to meet. He is always welcome to the training ground. We can share a lot of personal stuff. His opinion is very important to me, just like so many club legends have their opinion.

"They are all important to me, regardless of whether I agree. I will always try to learn from them."