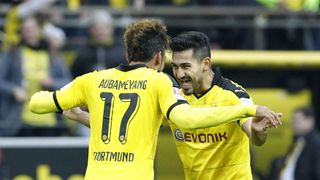 Matthias Ginter wants Pierre-Emerick Aubameyang and Ilkay Gundogan to extend their stays at Borussia Dortmund amid ongoing speculation over their respective futures.

The Gabon international's phenomenal form this season has seen him score 27 goals in 26 appearances in all competitions, with Arsenal reportedly interested in his signature.

Dortmund chief executive Hans-Joachim Watzke responded to transfer rumours surrounding the forward on Monday by stating the club were not dependent on just one player.

Aubameyang missing training on Tuesday due to a "private appointment" has further fuelled speculation that he could be on his way out of the club in January.

However, Dortmund defender Ginter believes the 26-year-old's importance extends beyond his goalscoring and is eager for him to stay at the club.

"On and off the pitch he is very important because he always creates a good atmosphere in training," Ginter said.

"In matches he always puts himself at the service of the team and is always good for a goal. We hope that he will remain."

Gundogan is another player who has been repeatedly linked with a move away from Signal Iduna Park this month, but Ginter hopes he and Aubameyang decide to remain with the Bundesliga side.

"I hope they [Aubameyang and Gundogan] extend their contracts," Ginter added. "We are all happy when they stay with us as long as possible."