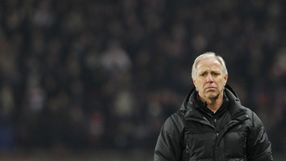 Montpellier need to channel all their attention towards matters on the pitch if they are to clinch a maiden Ligue 1 title, coach Rene Girard said ahead of Saturday's home game against Valenciennes.

"When you're six games away from something, you just don't think, you give absolutely everything and try to go all the way," he told a news conference.

A few dozen Valenciennes fans protested at a training session ahead of the team's trip to Montpellier, following the side's embarrassing 3-0 home defeat to promoted Evian.

According to France Football magazine, fans threw firecrackers towards the pitch and spoke to several players before leaving.

Valenciennes are 12th in the standings, four points above the relegation zone.

Paris Saint-Germain may have to win their last six games to win the French title, but midfielder Thiago Motta urged his team-mates to only concentrate on this Sunday's home match against Sochaux.

"We should not think about the six games ahead but just about the next one," the Italian international told a news conference on Friday.

"We missed out on a few opportunities but we should not dwell on it and look ahead."

Lille are likely to be without injured holding midfielder Florent Balmont when they travel to Dijon on Saturday.

"He has resumed normal training... but it is possible that will won't take a risk with him," coach Rudi Garcia was quoted as saying on the club's website.

Lille, who will definitely be without the suspended striker Dimitri Payet, are third in the standings on 59 points.

Evian will be without Brice Dja Djedje when they entertain Toulouse on Saturday, a groin injury ruling the defender out after he started all 32 league games this season.