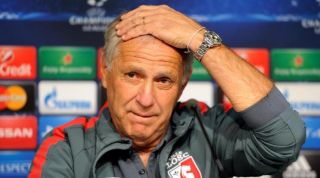 The Portuguese powerhouses took the lead in their two-legged play-off, courtesy of Hector Herrera's 61st-minute goal at the Stadium Nord Lille Metropole earning them a 1-0 away win.

Girard, who predicted the match would produce plenty of goals in the lead-up, said his men created plenty of chances but were unable to convert.

However, the 60-year-old also credited Julen Lopetegui's Porto as the deserved winners.

"We lost to the better side tonight," Girard said, according to UEFA.com.

"To compete with a team of their level you need to play differently.

"We should have done the opposite of what we did to be honest.

"We need to be more consistent – not necessarily having more possession, but being more accurate and clinical.

"We had quite a few opportunities, more than Porto in fact, but they were more clinical.

"If we had scored in the 44th minute, it could have changed the complexion of the tie, but that's football.

"We could have earned a draw at best, but to win you need to show far more collectively."

Girard was keeping the faith his men could overcome the deficit at the Estadio do Dragao on Wednesday.

"Don't forget that there's a return leg: we took a hit, but we're not dead," he said.

"We'll need to play differently, including our key players, else there's not much to hope for.

"We're going to regroup, talk, and then we'll go to Porto. I am not worried, just a bit disappointed."

Lopetegui also claimed his side wasted chances, but was overall pleased his men quelled the influence of Lille pair Divock Origi and Salomon Kalou.

"It was a very good match against difficult opponents," Lopetegui said.

"We had several opportunities to score more, and maybe we should have.

"There is always room for improvement. The only thing that counts is the verdict on the pitch, and I'm happy about it. We performed well against demanding opponents.

"The tactics that I chose at the start of the match were aimed at giving us more control and possession, to stop Lille shifting very quickly from defence to attack using the pace of Origi and Kalou.

"That's what we managed to do."