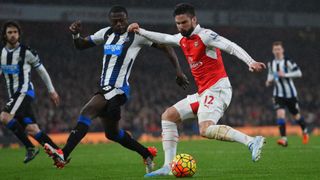 Olivier Giroud believes Arsenal already have a strong enough squad to mount a challenge for the Premier League title.

Arsenal sit top of the table and moved two points clear of Leicester City with a 1-0 win over Newcastle United on Saturday, but critics have suggested the squad lacks the depth required to be crowned champions for the first time since 2003-04.

Basel midfielder Mohamed Elneny is close to joining Arsene Wenger's side, but the French striker has refuted claims they also need a striker - though the coach has admitted he will be "busy" during the January transfer window.

"Tell me where [we need players]. Just tell me where! I will explain the opposite judgement," Giroud said.

"We have very good players as well on the bench, young players waiting to come in. They are very talented. I am not worried about it.

"Danny Welbeck will come back in a month and a half. Theo Walcott can play up front, Joel Campbell is doing well with his national team up front. If I am less good or get injured, we still have a solution.

"To be champions in a season – and I know that because I was a champion with Montpellier [in Ligue 1 in 2011-12] – you need talent, of course, but you need a bit of luck and sometimes you cannot play a fantastic game.

"We have experienced players like [Mathieu] Flamini, Per [Mertesacker], Petr [Cech] and even Lolo [Laurent Koscielny]. We have a good relationship between young players and experienced players. The older players need to bring confidence to the youngest and lead them.

"That is what I try to do sometimes. I always encourage them and show them, maybe, in a nice way, the best solution. All together, we are going to do it.

"We have a very good squad. We can play every competition and we will focus 100 per cent."