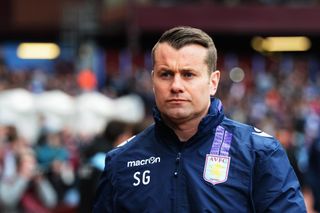 The former Republic of Ireland goalkeeper was thrust into the role as Paul Lambert's number two on an interim basis after the Scot's assistant Ian Culverhouse and head of football operations Gary Karsa were suspended by the club last week.

And his first experience assisting of Lambert was encouraging, as Villa earned a spirited goalless draw at home to Southampton to arrest a run of four straight league defeats.

Given has been isolated from the first-team picture this season and spent a spell on loan at Middlesbrough, with Brad Guzan cementing his spot as first choice and Jed Steer largely chosen as understudy.

The 38-year-old is now happy to be involved in his coaching capacity and revealed his first task was to play a joke on his fellow goalkeepers.

He told the Daily Telegraph: "Last week when it all kicked off the gaffer pulled me in on Tuesday morning and asked if I would be interested in helping out.

"The first thing I did on the training ground was tell Brad Guzan he was dropped and that Jed Steer would be in the stands.

"The experience against Southampton was something I really enjoyed. I'd love to be playing, of course, but now I'm bringing something to the team assisting the manager.

"You miss that drug, that adrenalin of being involved and I got it back to an extent last Saturday."

Despite enjoying his new position, Given wants to continue playing and will look to move on should the opportunity arise in the close-season.

He added: "The manager and the club have said they would let me go if somebody came in. It's quite clear with the budget the manager has here and the cutbacks to be made, but I still feel I've got plenty of time left in my career.

"When you train all week, do all the extra work in the gym, you question yourself because there's no game at the end of it.

"Hopefully something will happen in the summer and I can get playing again. You only have to look at Mark Schwarzer playing in a Champions League semi-final at 41-years-old on Tuesday or Brad Friedel at Spurs."