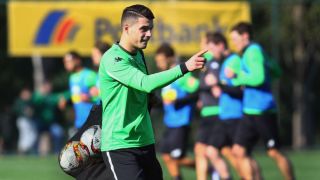 The Switzerland international has been linked with the likes of Arsenal and Liverpool recently, having become a key part of Gladbach's plans since arriving from Basel in 2012.

Xhaka was also talked of as a possible long-term replacement for Bastian Schweinsteiger following his exit from Bayern Munich and was backed by former Switzerland coach Ottmar Hitzfeld to succeed at the Allianz Arena.

The 23-year-old agreed a new four-and-a-half-year deal in February 2015 but Eberl says the club could be tempted to sell for the right price.

"It depends a bit on our own sporting success, it depends on Granit's own performances and of course it depends on the figures," he told WDR2.

"If they reach a certain level, then you could start to get dizzy. There are always situations in which every club would have to make considerations.

"It is all in our own hands. As things stand, we are happy to have him with us and hopefully he will stay with us for a long time."

Xhaka has made 23 appearances in all competitions this term, with fourth-placed Gladbach returning to Bundesliga action against Borussia Dortmund on Saturday.