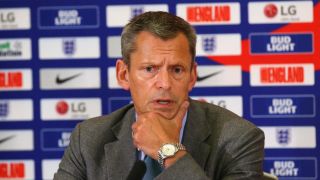 Football Association (FA) chief executive Martin Glenn will step down from his position at the end of the 2018-19 season.

In a statement released by the organisation, Glenn was praised for having "delivered much of what he came to do" and leaving "strong foundations for his successor".

Glenn was appointed to the role in 2015 and his first major tournament with the FA ended in ignominy, as England were knocked out Euro 2016 by Iceland at the last-16 stage.

But England regrouped under Gareth Southgate and enjoyed a superb run to the semi-finals of the 2018 World Cup.

Glenn also oversaw the re-organisation of the domestic fixture schedule that will see English football implement a mid-season break from next season.

"When I accepted the role of CEO at the FA, I was tasked with improving the effectiveness of the organisation and making it financially secure," Glenn said.

"I also joined with the strong belief that the England team's performance in tournaments could and should improve, and that the experience of the millions of people who play football could be a better one.

"I will leave feeling proud of the success of the performance of all the England teams. I am confident that we have established, in St George's Park, a world-class centre which will ensure that the teams will continue to build on their current successes.

"I hope that the FA will be able to build on this by accelerating the breakthrough of English qualified players into the first teams."

Our Chief Executive Officer will depart at the end of this season: December 13, 2018

England's age-group teams have entered a dominant period during Glenn's time in charge, with the Under-17 and Under-20 sides both becoming World Cup winners in 2017.

It has also been a spell of success for the England women's team, who achieved a best-ever finish of third at the 2015 World Cup and reached the semi-finals of Euro 2017.

The manager who oversaw those campaigns, Mark Sampson, was subsequently sacked after evidence of "inappropriate and unacceptable" behaviour with female players during his time at Bristol Academy.

Sampson was also found to have made racially discriminatory remarks towards England players Eniola Aluko and Drew Spence. The FA apologised to Aluko and Spence but a Department of Digital Culture, Media and Sport select committee inquiry invited further scrutiny upon Glenn and his organisation.

He denied allegations that he tried to "blackmail" Aluko into making a statement to say the FA is not institutionally racist.

In the press release announcing Glenn's departure, the FA said: "Under his leadership, our culture has changed. He has recruited a new team which has helped make us a more progressive, effective and diverse organisation. Now, 34 per cent of our staff are female and 12 per cent from a BAME background.

"In his three-and-a-half years at the helm, Glenn has overseen a 40 per cent increase in revenue but he saw a proposed £600million bid to buy Wembley from Shahid Khan collapse when the billionaire Jacksonville Jaguars and Fulham owner pulled out.

FA chairman Greg Clarke praised Glenn, saying: "His integrity, commitment, energy and passion for football has underpinned the improvements on and off the pitch.

"The resulting commercial success has funded hugely significant change in the women's game, St George's Park, the FA Cup and the national teams.

"Martin leaves as his legacy an organisation that is fit for purpose, more diverse, internationally respected and ready to progress to the next level."