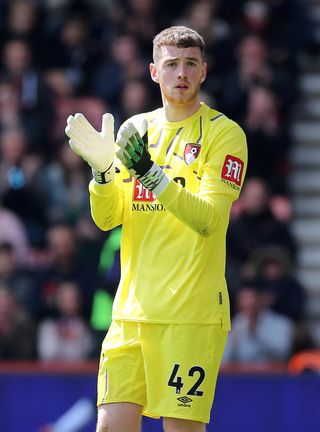 The 20-year-old made a bright start to his senior Bournemouth career when he kept an impressive clean sheet on his debut against Tottenham on May 4.

His only other appearance last season proved more troublesome, with Eddie Howe’s men losing 5-3 at Crystal Palace on the final day of the campaign.

But Travers is highly regarded at the Vitality Stadium and has now committed his future to the club.

“I’m delighted to sign a new contract,” the Republic of Ireland Under-21 international told afcbTV.

“On a personal note, it was a great end to last season and to now get this deal sorted, it will really help me push on and into the new season.

“As soon as the offer was there I was really keen to sign and commit my future to the club.

“The manager and backroom staff have been brilliant with me. I’ve developed as both a person and player during my time with the club and I’m excited for what the future holds.”

After a spell at Shamrock Rovers, Travers was signed by Bournemouth in 2016 and cut his teeth during a loan spell at Weymouth.

He was named man of the match following the 1-0 win over Spurs and will continue to contest the number one position with Asmir Begovic and Artur Boruc.