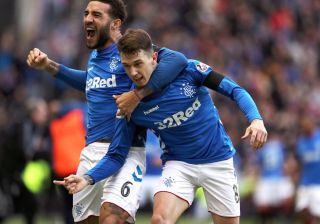 Connor Goldson was blown away by his first Old Firm experience at Ibrox and now the Rangers defender hopes a repeat performance will provide a double dose of derby delight.

Gers host their bitter rivals on Sunday as the Glasgow foes square off for the fourth and final time this season.

So far, champions Celtic lead the way having come out on top in both Parkhead clashes but Goldson is determined to back up December’s triumph for Steven Gerrard’s side.

Ryan Jack’s strike proved the winner in the final showdown before the winter break as Ibrox erupted amid jubilant scenes.

Rangers played to their maximum and got their rewards with a deserved victory, their first league win over the Hoops since 2012.

Goldson was left wowed after the final whistle as he stood in front of the Copland Road stand soaking up the Ibrox faithful’s joyous celebrations.

But the centre-back says his side will need to hit those heights again if they are to level up this season’s derby head-to-head and get another taste of Old Firm ecstasy.

He said: “In every Old Firm, you know you’re going to play against a good side and that you will have to be at your best.

“On that day on December 29, we managed to reach our best level and did enough to win the game.

“That just shows us as a team that if you want to come out on top of these games, then that is the standard you need to reach.

“That match was up there with the best experiences I’ve had. It was a great day.

“I’ve enjoyed all the Old Firms even though the results haven’t been great.

“The team has been performing great and hopefully if we can get another top performance this weekend we’ll get the three points.”

There was to be no rewards, however, as Celtic pounced on James Tavernier’s blunder to take another huge step towards their eighth title in a row.

But, despite the pain of that set-back, Rangers have responded impressively with five straight wins and Goldson says that is down to the belief generated by their display in the second 45 minutes at Parkhead.

He said: “In the last Old Firm we know that we performed well, especially in the second half.

“We were very reactive in the first half to what they were throwing at us. But after the break we were right on the front foot. We had nothing to lose and since then we’ve gone on a good run.

“Now we’re going into this one with confidence. We’re keeping clean sheets and looking solid.

“We’re not allowing many shots on our goals and I think the only goal we’ve conceded was away to Hearts.

“We’ve been strong in that area but as well as that, we’ve been scoring goals and when you’ve got a good blend of both things it’s a recipe for success.”

Goldson is likely to start alongside Nikola Katic and the former Brighton defender has been impressed with how his Croatian colleague has bounced back after losing his place to Joe Worrall earlier in the campaign.

“Nikola’s done really well,” said the Englishman. “He’s settled back in and is looking confident.

“He’s looking the player he was at the start of the season.

“I feel like he’s calmed down and is just playing his own game isn’t worried or nervous about having to impress.

“When he plays his own game he’s a top player.”