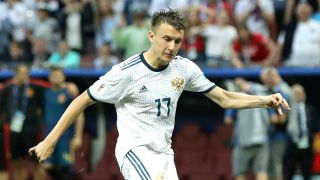 Aleksandr Golovin looks to be on his way to Chelsea, if a social media post from CSKA Moscow team-mate Sergey Chepchugov is anything to go by.

Russia international Golovin has been linked with a move to a major European side after impressing for his country in their surprise run to the World Cup quarter-finals.

The 22-year-old has been widely tipped to join Maurizio Sarri's Chelsea, who have already moved to strengthen their midfield options with the signing of Jorginho from Napoli.

It appears Golovin's switch to Stamford Bridge is on the cards, with Chepchugov having wished his team-mate good luck at his next club in an Instagram post.

The goalkeeper congratulated Golovin on joining Chelsea and wished him a "great career".

Time will tell if Chepchugov's post proves accurate, with Golovin also said to be interested in joining Cristiano Ronaldo at Juventus, according to Italian newspaper Tuttosport, while Monaco is another potential destination.