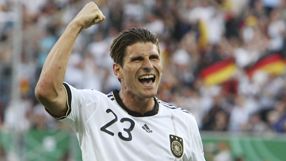 Gomez and Khedira are back after missing the previous set of internationals earlier this month.

The three-times champions have already qualified for next year's tournament but are eager to become the first Germany squad to win all their qualifiers for a major tournament.

"It was important for us to qualify early on and now we want to win these two qualifiers to have won 10 out of 10," said coach Joachim Low.

Low also called up Borussia Monchengladbach's attacking midfielder Marco Reus who has yet to make his debut after being ruled out with injury in his last three call-ups.

Germany, who top Group A with 24 points from eight games, travel to second-placed Turkey on October 7 before hosting Belgium four days later.

Turkey have 14 points, two ahead of Belgium.