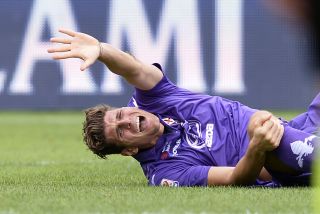 Gomez, who joined the Serie A club from Bayern Munich in July, has been out of action since sustaining knee ligament damage in the 1-1 draw with Cagliari last month.

The Germany international has made five appearances for Fiorentina as a result of the injury, which came just two weeks after he netted a double in the 5-2 win at Genoa.

But the 28-year-old revealed that he has made great strides in his recovery, and is looking to make his return in the near future.

"I believe that at the end of the week I could be on the pitch, I still can't play, but I can start running.

"After the match against Cagliari, I was told that seven eight weeks needed to recover. Four weeks have passed up to now and I'm feeling good and I don't feel pain.

"It isn't easy not to play. The first week after the injury has been especially difficult, but after that period, you understand that this is football.

"Now I'm working every day and I train also in the gym, so I'm happy.

"I hope I'll be starting again to play soon, but I still don't know a precise date. It only depends on the condition of my knee: when it will be okay, I'll enter the pitch and play."