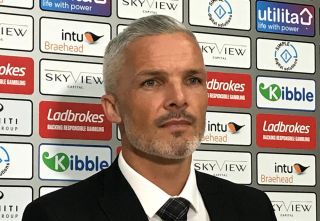 St Mirren manager Jim Goodwin insists it is crucial they bring in new signings ahead of the Ladbrokes Premiership campaign following their Betfred Cup penalty shoot-out defeat to East Kilbride.

Lowland League outfit East Kilbride triumphed 6-5 on penalties following a 0-0 draw, which leaves St Mirren’s hopes of progressing to the knock-out stage hanging by a threat.

St Mirren have only added Oan Djorkaeff and Tony Andreu to the squad which retained their Premiership place following Play-Off success against Dundee United and there have been a raft of departures.

Goodwin revealed Saints are working hard to get bodies in but knows it is vital they now get some of their targets signed up.

“We are short of bodies and it’s difficult for the players as the majority of them have played three games in a week,” Goodwin said.

“At this time of the season that’s not ideal preparation. They’re not anywhere near as fit as what they should be at the moment and you would like to have more options there to freshen things up like some of the bigger clubs can.

“But I knew taking on the job that we had a job on our hands to get people in. But we’re doing all we can to make that happen before the league starts.

“There’s not enough in the squad at the moment. It would be unfair throw kids in at this stage as they’re not quite ready. We need good first-team pros who can come in and make a difference.

“We’re confident of getting one or two over the line soon but it takes time. I wouldn’t have thought we’d have any in before Tuesday. There’s none close enough to say they’ll be over this weekend to sign papers. Easter Road is the priority.”

East Kilbride’s Ryan Sinnamon and Saints’ Danny Mullen missed in the regulation shoot-out and when Cody Cooke was ordered to retake his spot-kick as referee Colin Steven hadn’t blown his whistle, his second effort was saved by Alan Martin.

That presented Ruari Paton with the chance to clinch the bonus point and he made no mistake.

East Kilbride manager Stuart Malcolm said: “The game finished a draw and we got a bonus point for the penalties, which was a great for the fans.

“But for us it’s another step closer to where we want to be at the start of the season.”