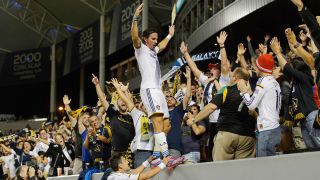 Having tested the waters of free agency, Alan Gordon is deciding to stay put.

The U.S. national team striker took to Instragram on Friday to announce he is re-signing with the LA Galaxy, with coach Bruce Arena retaining the services of the league's most renowned late-game specialist.

Gordon has made 43 appearances (12 starts) since being acquired in an August 2014 trade with the San Jose Earthquakes, scoring 10 goals.

His form off the bench has earned the unlikely attention of U.S. coach Jurgen Klinsmann, who called up Gordon for the knockout stage of the Gold Cup in July and for the national team's opening World Cup qualifiers in November.

The 34-year-old figures to provide depth for the Galaxy behind starting forwards Robbie Keane and Giovani dos Santos, with the versatile Gyasi Zardes also an option up top.