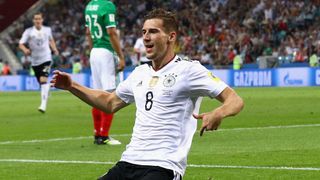 Leon Goretzka has asked Schalke fans not to turn on him after agreeing a deal to join Bayern Munich because that could "make it hard" for the team to achieve their targets.

After months of speculation about his future, Schalke and Bayern confirmed on Friday that the Germany international had agreed to join the Bundesliga leaders when his contract expires at the end of the season.

There had been reports that Bayern would attempt to bring Goretzka to the Allianz Arena this month, but that never materialised and the 22-year-old will remain in Gelsenkirchen for the remainder of the campaign.

However, he recognises that such a scenario could potentially see him become the target of angry Schalke fans and he has pleaded with them to go easy on him, as to do otherwise – he believes – could be detrimental to the rest of the team as they battle RB Leipzig and Borussia Dortmund for second place.

In a statement on his official Facebook account, Goretzka wrote: "FC Schalke 04 announced at today's [Friday] press conference that I will leave the club on June 30.

"I know that I will disappoint you all and you will have little understanding of it. Any explanation I would make now will be very much appreciated by you.

"I don't want to leave now, because I'm still playing the second half [of the season], and everyone who knows me just a little knows that I'm always going to give my all. I want to return Schalke to the Champions League and would like to win the DFB-Pokal in Berlin on May 19.

"I have had conversations with [chairman] Clemens Tonnies, [sporting director] Christian Heidel and [coach] Domenico Tedesco in the last few days. They were very sad and disappointed too, especially because they gave everything and left no stone unturned in an attempt to keep me at Schalke.

"In a conversation on Wednesday, in particular the coach has made me even more aware of my absolute duty and told me he 100 per cent believes in me.

"I want and I will give that back, because it is no empty phrase when I say that the five years at Schalke will remain firmly in my head and in my heart.

"That's why I want to ask you for one thing; you don't have to agree with my decision, but don't make it hard for us because we have targets that we want to achieve.

"Aside from that, it's good that he's staying in the . Leon deciding to sign for is fantastic news." January 19, 2018