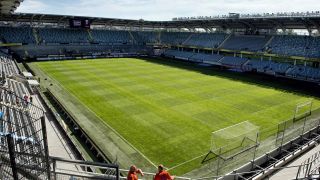 An alleged match-fixing attempt has prompted the Swedish Football Association (SvFF) to postpone Thursday's Allsvenskan match between Gothenburg and AIK.

The SvFF say an unnamed AIK player was offered a "substantial sum" of money as well as being threatened on Tuesday in order to underperform in the match.

Police have launched a preliminary investigation, the association added.

"It is ultimately not about a single match, it is an attack on Swedish football," the association's secretary general Hakan Sjostrand said in a statement.

"We will never, never accept that and it is important that we act forcefully.

"The starting point for all of our games is that they are safe and settled on sporting grounds. Based on the information we have, we cannot guarantee that."

Talks with the clubs involved will be held to discuss rearranging the top-flight fixture.

Gothenburg are 11th in this season's Allsvenskan, while AIK are sixth.