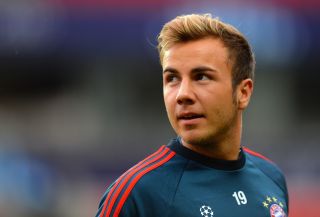 The 21-year-old has missed the majority of the season with an ankle problem but after coming on as a substitute against Mainz last Saturday, quickly reminded Bayern what they were missing.

The Germany international came on for Rafinha at half-time and was immediately involved, setting up two of their four goals as the European champions came from behind to win 4-1 at the Allianz Arena.

And Gotze is hoping to be involved from the start on Wednesday, when Bayern host Viktoria Plzen of the Czech Republic.

"What is important for me is to play now for a long period of time," he said.

"The game with Germany against Sweden (last week) and the game against Mainz did me a lot of good. The more I play the fitter I get."

Bayern will be expected to record an easy victory against Plzen, who are still waiting for their first point of the group stage.