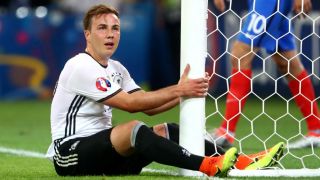 Gotze courted controversy in 2013 when, as the jewel in a Dortmund attack that won back-to-back Bundesliga titles under Tuchel's predecessor Jurgen Klopp, he agreed a switch to Bayern during the closing weeks of the season.

Bayern beat Dortmund in that season's Champions League final, with Gotze an injury absentee, but the man who went on to score the winning goal in the 2014 World Cup final was unable to make a telling impression over three subsequent seasons at the Allianz Arena.

The 24-year-old's return was confirmed on Thursday and, speaking ahead of the International Champions Cup match against Manchester United in Shanghai, Tuchel agreed with the player's earlier assessment that he should expect a mixed reception from the Dortmund faithful.

"Mario chose the hard path. He wanted to go back to our stadium," said the coach, who credited Gotze for choosing Dortmund over other, arguably less complicated options.

"The circumstances of his farewell to Bayern are known. There were plenty of opportunities for him to overcome the problem – with a transfer abroad, a restart.

"He could have prevented problems by going overseas, but he wanted to come back to us.

"I see Mario as a central player, I want to see him laugh again more often."

Dortmund defender Marcel Schmelzer expects Gotze to take any turbulence associated with the transfer in his stride.

"Mario has become much more mature with the years, that I know from personal conversations with him," Schmelzer said.

"His is one step further and I believe he will handle it well, he will befriend our fans with his commitment.

"Mario is again part of us. He should be supported as well as any of us."

Gotze could slot into the void left in the Dortmund side by Henrikh Mkhitaryan's move to United, but Tuchel has no hard feelings ahead of Friday's reunion with the Armenian.

"I am very excited to see him and to give him a hug," he added.

"He is and remains a champion and was a big factor in our outstanding season last year.

"We are not here to take it personally, since it comes down to financial matters and to sporting challenges.

"From my side there are no reservations, although I would have loved it if he would wear a yellow jersey tomorrow."