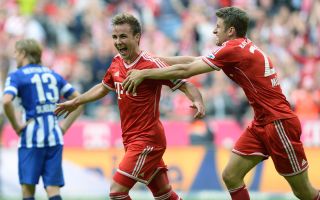 The 21-year-old Germany international switched to the Allianz Arena in the off-season and broke through for his first goal in Bayern colours in their 3-2 come-from-behind win over Hertha Berlin on Saturday.

Götze said joining a Bundesliga rival was no problem for him, all the while battling to recover from a hamstring in pre-season.

"Getting through the rehabilitation period certainly wasn't easy but I was pretty sure I would settle into the side and surroundings quickly here," Götze told Bundesliga.com.

"I already knew a few players from the national team and I think that's helped make everything easier for me.

"I'm just happy to be playing for Bayern now, with the coach and all the other stuff... that was a really important part of why I moved here."

On his first goal for Bayern on Saturday, Götze conceded he was fortunate to get on the scoresheet and give his side what would turn out to be a necessary two-goal buffer as Hertha pulled one back late on.

"It was pretty lucky the way it dropped in at the back post," he said.

"There wasn't much power on the header but thankfully it went in. Lucky but good for us."

Götze also heaped praise on fifth-placed Hertha for their brave performance at the Allianz, as the promoted club threatened to cause a boil-over before tasting defeat.

"It was a tough game," Götze said.

"We were up against a really aggressive, on form, Hertha side. They're not where they are on the table for nothing."