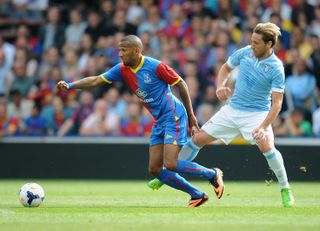 The French midfielder was signed by former Palace boss Ian Holloway in August, but has not made a single appearance in the Premier League this season.

Grandin has been linked with Championship clubs Sheffield Wednesday and Charlton Athletic as well as a move to Turkey.

The former Blackpool man's agent, Christian Emile, has revealed that the 26-year-old has grown increasingly frustrated with a lack of first-team football and could seek pastures new this month.

Emile told Sky Sports: "Elliot has been working hard but has not got his chance to impress on the pitch for Crystal Palace,

"He needs to be playing regular football so if the right club and opportunity here or abroad presents itself this January, then we will definitely consider it."