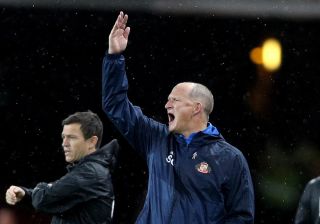 Blackpool manager Simon Grayson will not allow striker Armand Gnanduillet to take the same style of penalty again following his poor miss in the 2-2 FA Cup third-round draw at Reading.

Gnanduillet tried a Panenka-style spot-kick in the 68th minute but tamely chipped the ball against the crossbar.

Sky Bet League One side Blackpool had taken a first-half lead through Nathan Delfouneso only for Sam Baldock to equalise early in the second half.

Gnanduillet restored Blackpool’s advantage – with his 15th goal of the season – but Reading substitute Danny Loader levelled with a cheeky backheel.

“It’s frustrating because Armand has scored every penalty this season,” Grayson said.

“He’s put his foot through the ball, whether it’s gone right, left or down the middle.

“For whatever reason, this time, he’s decided to chip it.

“If you’re going to do that, chipping it, then you’ve got to make sure that it goes in.

“It would have been nice if he’d just smashed it into the top corner.

“Armand might take the next penalty but I won’t let him chip it. He will not be doing that again.

“I was still proud of the players today. We played really well defensively.

“Offensively, we passed the ball well and created some good chances.

“Reading were bright and caused us a few problems early on but I thought that we grew into the game.

“But we missed that great opportunity, with the penalty, to go 3-2 up. I’d have been confident with our group to defend that lead.”

Reading fielded a much weakened side but are now undefeated in seven matches.

“We’re trying to push for the play-offs in our respective leagues so this hasn’t really suited anybody.

“But it’s the cup, it’s important to the supporters, and it’s another game unbeaten and we’re still in the hat for the next round.

“I thought it was an entertaining game, there was a lot of incident in it.

“We started well and controlled possession, especially for the first 30 minutes, and we felt quite comfortable.

“But we showed resilience to twice come back into the game and with good goals from Sam and Danny.

“Perhaps we got a tiny bit sloppy in the second half and we didn’t concentrate enough with our defending.

“But it’s a learning curve for some of the younger players.

“I don’t think that all my changes were too drastic. My focus is on what I think is best for this club.

”We’ve put ourselves in touching distance of a play-off place and, at the moment, I’ve got to protect that position.”