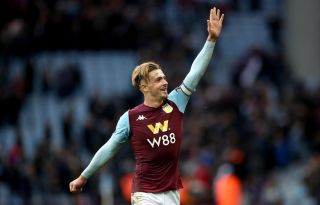 Jack Grealish prepares to take on Manchester City believing his new role for Aston Villa is getting the best out of Brazilian striker Wesley.

Grealish has taken over the Villa captaincy this season with Wales defender James Chester sidelined by hamstring touble.

The 24-year-old is also getting to used to a new “inside number 10” role, which has seen him, Anwar El Ghazi and John McGinn playing closer to summer signing Wesley in recent weeks.

“That’s why the manager (Dean Smith) pushed me further upfield. I’m not playing like a left-winger, more of an inside number 10.

“The manager wanted me, Ginny and Anwar to get closer to Wes because, at the start of the season, maybe that’s what we were lacking a bit.

“We were isolating Wes sometimes and he was up there on his own.

“If you want to get the best out of Wes he likes to get hold of the ball and bring others into play and for others to play off him, which is why he was so effective (in victory) at Norwich.

“That’s what we’ve been trying to do recently and it’s worked.”

Vila were in the Premier League relegation zone at the end of September after being held 2-2 at home by Burnley.

But a 5-1 victory at Norwich – in which Wesley scored twice and Grealish once – and a 2-1 home defeat of Brighton has lifted Villa to 12th in the table.

Grealish scored his fourth goal of the season last weekend and is relishing Saturday’s meeting with the champions at the Etihad Stadium.

“We all know how tough the games are going to be, playing Man City away and then Liverpool at home,” Grealish said.

“They’re the two best teams in the league and could be up there in the world.

“All of the lads want to play in the Premier League and these are the games you look forward to.

“I guarantee the guys that have come over from abroad are looking forward to this one the most, playing against Man City and the best players in the world.”

Villa boss Smith says he has been delighted by Grealish’s impact as his promoted side have found their feet in the top flight.

“I think Jack’s proved he belongs in the Premier League,” Smith said.

“I believe he’s been a Premier League player for the last couple of seasons, but unfortunately he’s been playing in the Championship.

“Now he’s got that opportunity to show what he’s about and he’s grown into the season.

“His productivity is getting better in regarding assists and goals, and he looks like he really enjoys the responsibility of being the Aston Villa captain.

“If those performances continue there’s every chance that the England manager will call him up. But he has to keep doing well for Villa.”