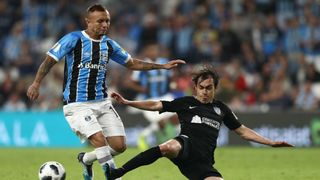 A stunning Everton goal early in extra-time secured Gremio's progression to the Club World Cup final with a 1-0 victory over 10-man Pachuca in Al Ain on Tuesday.

It was a fiercely contested fixture which lacked quality in the final third for much of the game, resulting in proceedings going to an extra 30 minutes, but ultimately a sublime solo goal made the difference, with Gremio set to meet either Al Jazira or Real Madrid in the final.

Chances were at a premium in the first half, as both sides cancelled each other out in a drab affair that even the highly sought-after Luan struggled to set alight.

Things were a little more gripping in the second half, with both goalkeepers actually forced into meaningful saves within the first quarter-of-an-hour as the two teams upped the ante.

Although neither side could find a way through during the regulation 90 minutes, a moment of brilliance from Gremio substitute Everton put the Brazilian giants ahead early on in extra-time.

Pachuca - who saw Victor Guzman sent off late on - had little choice but to throw men forward thereafter, though Gremio rarely looked like relinquishing their lead and they comfortably held on to book their place for the right to call themselves world champions.

Neither side did a particularly good job of exerting control during the first half, with the play often getting bogged down in midfield.

The talented Luan did inspire a decent chance after half an hour, though.

The playmaker dropped deep and spotted the run of Ramiro in behind the Pachuca defence, but the winger's first touch inside the area knocked the ball wide of the post.

Pachuca finished the first half on top and nearly crafted a brilliant chance at the end, only for Bruno Cortez to make a vital last-ditch challenge on Keisuke Honda, who was through on goal.

The Liga MX side injected a little more urgency into the match upon the restart and Erick Aguirre tried his luck from the edge of the area in the 55th minute, forcing Marcelo Grohe into a smart save to his right.

Oscar Perez was then called into action for the first time soon after at the other end, tipping Luan's 30-yard drive on to the post, with the 44-year-old goalkeeper defying his age by getting down quickly.

Luan was then presented with a glorious opportunity in the dying stages when a corner was flicked on to him, but he could not react quick enough and the ball just struck him, with the match subsequently going to extra-time.

It did not take much longer for Gremio to break the deadlock, though, and Everton did so in style, as he cut in from the left, made space for himself in the area and curled an unstoppable effort into the top-right corner.

Pachuca's hopes of a late fight-back were all but ended in the 110th minute when Guzman was sent off for a second booking after a late tackle, and Gremio had little difficulty holding on.