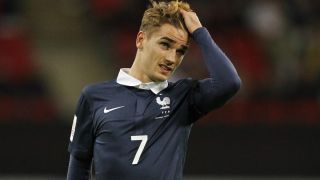 Antoine Griezmann is hoping France international team-mates Karim Benzema and Mathieu Valbuena will be able to represent their country at Euro 2016.

Benzema is suspended indefinitely from the national team due to his alleged involvement in a sex tape scandal against Valbuena.

The Real Madrid striker was arrested in early November last year and warned he could miss out on the European Championships if the case did not evolve by then.

While Valbuena was not handed any suspensions, coach Didier Deschamps did not pick him for the nation's recent round of friendlies in November.

Griezmann is hopeful he will see both of them make the squad for the finals, but admits France have capable replacements if the duo do not make it.

"I hope to see Benzema and Valbuena at the Euros," the 24-year-old told Telefoot.

"But if that doesn't prove to be the case, we have forwards like [Olivier] Giroud, [Alexandre] Lacazette, or [Kevin] Gameiro who are also important."

Griezmann is in fine form this season and the Atletico Madrid forward has his eyes on lifting trophies with the Spanish club.

"I am happy at Atletico Madrid," he said. "I am ambitious and I want to win titles here.

"It is a great club and my objective is to win trophies with Atletico."

Atletico sit equal top of La Liga alongside Barcelona, are in the quarter-finals of the Copa del Rey and are set to face PSV Eindhoven in the Champions League round of 16.