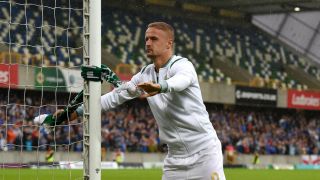 Celtic forward Leigh Griffiths has been charged by UEFA with provoking spectators after the Scottish Premiership champions' 2-0 win over Linfield at Windsor Park.

Early goals from Scott Sinclair and Tom Rogic gave Brendan Rodgers' side a 2-0 victory in the first leg of the Champions League second-round qualifier but the match was marred by fans throwing missiles at Celtic players.

After one such incident, Griffiths was booked, having complained to the referee Alejandro Hernandez about a bottle being thrown in his direction as he prepared to take a corner.

Following the final whistle, Scotland international Griffiths tied a Celtic scarf to one of the goalposts.

Celtic have also been charged with improper conduct for having five players booked during the match, while Linfield must answer charges in relation to throwing objects and supporters invading the field.

UEFA's control, ethics and disciplinary body will deal with the case on Thursday.