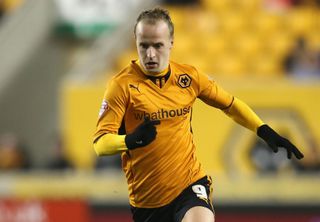 Griffiths has impressed in League One this season, scoring 12 goals, and also thrived during a loan spell in Scotland last season with Hibernian.

Celtic are 18 points clear at the top of the Scottish Premiership and Griffiths said: "I'm over the moon. It's been a long time coming.

"Ever since I heard Celtic were interested there was only one place I wanted to play and I'm just glad it's done now.

"It was the middle of December and my agent gave me a phone and said Celtic could be interested in January and I have just been counting down the days.

"Unfortunately, it's taken to the last day but I'm just glad that it´s been done now and I can't wait to get started.

"I want to bring goals – that´s what I am all about and what I love doing. I did it last season for Hibs and have done it for Wolves and now it's my time to shine in the Hoops and hopefully I can do it."