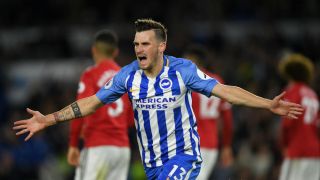 An impressive debut season for Pascal Gross at Brighton and Hove Albion in the Premier League has been rewarded with a one-year contract extension.

The German midfielder was a relative unknown when he swapped Ingolstadt for Brighton in July, but he quickly became a household name thanks to his performances for the Seagulls.

Gross finished the 2017-18 campaign with seven goals and eight assists, and that was enough to earn a new deal that will run until 2022.

"We are delighted that Pascal has agreed a new contract with the club," said manager Chris Hughton.

"He has enjoyed an excellent first season with us in the Premier League, and we are really pleased with the impact he has made.

"He settled very quickly and became an integral member of the team. He won the club's Player of the Season award, which was particularly impressive in his first season in England."

Gross added: "I'm very pleased to get the new deal done, I think we had a very hard year last season and I'm happy to commit my future to the club – it's a very special day for me.

"I thought last season was very good for the team – we achieved our big aim of staying in the league, and from a personal perspective I was delighted to be able to help the side with goals and assists.

"The Premier League was everything I expected and at the start it was tough, but I knew it was going to be like that and I enjoyed being part of some very special games."