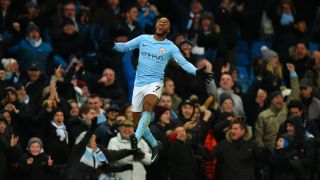 City confirmed on Thursday that Guardiola had agreed new terms until 2021 - the Catalan adding two years to a deal that had been due to expire at the end of next term.

The brilliance of Guardiola's side in the recently concluded Premier League campaign was clear for all to see, City sealing the title with five games remaining and reaching an unprecedented 100-point tally with victory over Southampton on the final day of the season.

Here, we look back at some of the key factors behind their dominant triumph.

7 - Pep Guardiola has won the top-flight league title in seven of his nine seasons as a manager, with the only exceptions being 2011-12 at Barcelona and 2016-17 at Manchester City. Mastermind. April 15, 2018

City were labouring towards a second consecutive draw when Raheem Sterling's deflected strike dolloped past Bournemouth goalkeeper Asmir Begovic to seal a 2-1 win in a breathless finale at the Vitality Stadium in August. There had been little evidence of the imperious form to follow but it was the first of a Premier League record 18-match winning run. England winger Sterling, so often criticised for being a wasteful finisher, became City's clutch player. He had already come off the bench for the 10-man hosts to peg back Everton in the previous game and, when last-gasp wins over Huddersfield Town and Southampton needed grinding out, Sterling stepped forward. A 23-goal haul in all competitions - achieved despite some galling, high-profile misses of late - represents the best season of a career flourishing all over again under Guardiola's guidance.

Among countless star turns in Guardiola's side, Kevin De Bruyne has been the standout. A dutiful cog in the machine during the opening weeks, the Belgium midfielder kicked into gear and City's season duly took flight. A masterful performance against former club Chelsea was crowned by a wonderful winning goal, underlining De Bruyne's intrinsic feel for the big moments in games and seasons. He brought the house down at home to Stoke City next time out – a reverse pass to create Sterling's goal and remarkable assists for Gabriel Jesus and Leroy Sane in a 7-2 shellacking taking the breath away. It is a level he has maintained with startling regularity.

42 - Since the start of the 2015-16 campaign, Kevin De Bruyne has provided 42 assists in the Premier League, more than any other player in the Big 5 European leagues. Expected.31 March 2018

The notion of anything resembling an actual 'race' for the Premier League title was abandoned long ago due to City's relentless form, but things could have been different back in December. Guardiola's men arrived at Old Trafford with a handy eight-point lead over neighbours United at the summit. A defeat might have prompted a serious challenge from Jose Mourinho's men, but goals from David Silva and Nicolas Otamendi secured a deserved 2-1 win after the visitors controlled the majority of the action. City went on to enjoy a 4-0 win at Swansea City and a scintillating 4-1 victory against Tottenham over the following six days. United then rounded out 2017 with three consecutive draws and the gap was effectively unbridgeable.

Silva sat out the Tottenham game due to a family issue, later confirmed to be complications relating to the premature birth of his son Mateo. The Spain international has since shuttled between Manchester and his family base in Valencia, missing a handful of matches and many more training sessions. Throughout this period of unenviable personal anguish, the diminutive Silva remained a footballing giant on the field for City, adding to his substantial collection of sublime displays and man-of-the-match accolades.

"When I play football I forget about everything else, it is good for me to play," he said after scoring both goals in March's 2-0 win at Stoke. "My private life is very hard for me but my son is fighting and getting better." Silva is probably the finest playmaker ever to grace the Premier League and Guardiola's City would have no chance of looking so picture perfect without him.

Stumbling at the finish line

Having bent most weeks of the season to their will, City picked a terrible time to falter at the beginning of April. Liverpool dispatched them 5-1 on aggregate in the Champions League quarter-finals and United improbably came from 2-0 down to win 3-2 at the Etihad Stadium and prevent City from sealing the title in fairytale fashion. Defensive weaknesses were exposed to offer rivals encouragement for next season but it was an unusual slump.

The attacking football City unfurled in the first half against United and the ferocious intensity they hit Liverpool with before the break in the quarter-final second leg bore comparison to any of their best work this season, as did the restorative 3-1 win at Tottenham. Six of the XI that lost 2-1 at home to Liverpool were 24 or under, underlining the sense that the best is yet to come from Guardiola's team.