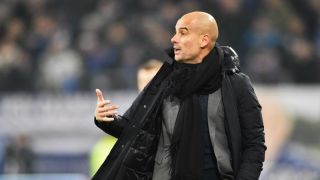 Bayern Munich coach Pep Guardiola has denied suggestions that the relationship with his players has turned sour following his decision not to renew his contract with the Bundesliga leaders.

Recent reports from Germany suggested a number of key players have had enough of Guardiola's strict approach and that the atmosphere in the dressing room has reached an all-time low in recent weeks, with one of the players allegedly leaking internal communication to the press.

Nevertheless, Guardiola has laughed off such claims and is adamant there are no problems between him and his players.

"My relationship with the players is better than ever before," Guardiola said at a news conference.

"Whenever I say something, it's in the papers the days after. I experienced something similar in my first year and in my second year as well, while it also happened in July.

"I am not too worried about it. I tried to fight it in my first year, but that doesn't lead to anything. I always want the best for my players with everything I do."

Guardiola reportedly admonished two players in front of the entire squad over a perceived lack of professionalism and weight problems, while the players supposedly also received an e-mail asking them to formally check in on their days off.

"I have read about the alleged lack of professionalism," the coach added.

"Over the past two seasons, some players returned to the club two to three kilograms overweight.

"But we trained really well this winter in Qatar. It's only normal to check your players' weight. Coaches across the world do the same. The names of the players with weight issues? We will keep that to ourselves.

"There is absolutely no problem with that e-mail. We get a lot of e-mails from the team manager.

"This is to make sure the players don't drive to Berlin for example when they have just one day off. I don't see a problem here."

Meanwhile, chairman Karl-Heinz Rummenigge has insisted Guardiola still has the club's full backing irrespective of his imminent exit and alleged unrest in the dressing room.

"Guardiola will have the full support of everybody at Bayern right until his final day at the club," Rummenigge added.

"Everybody who has been writing lame duck stories should bear that in mind."