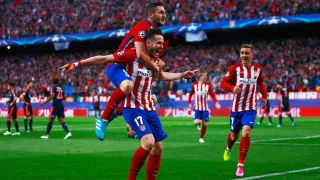 Saul's incredible solo effort helped Atletico to a 1-0 win over Bayern in the first leg of their semi-final on Wednesday.

The run and finish led to comparisons to Barcelona superstar Messi, who has scored numerous goals by gliding past defenders.

However, Guardiola said it was best not to compare the 21-year-old to the Argentina captain.

"I don't know him personally but I have a lot of respect for the quality Saul has," he said.

"But it would be good for him not to compare him with Messi."

Fernando Torres hit the post for Atletico, while David Alaba went closest for Bayern when he struck the crossbar.

Guardiola felt his team deserved a goal at the Vicente Calderon.

"We have to think about who we are up against. What Saul did can happen," he said.

"We did not get a goal but you play some games and you get nothing when you don't deserve it, today we maybe did deserve one.

"This is not an excuse, just an argument about what I have seen."