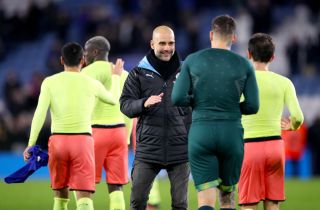 Pep Guardiola was grateful for a tough workout after his Manchester City side edged out Leicester 1-0 in their dress rehearsal for Wednesday’s Champions League last-16 clash against Real Madrid.

A trip away to face a side just one place below them in the Premier League was a stiff examination just days before City head to the Spanish capital and it showed as they needed a late Gabriel Jesus strike after Sergio Aguero added his name to the list of those to miss a penalty for City this season.

But Guardiola was proud of the way City responded to Aguero’s miss on the hour as they nicked victory with 10 minutes to go.

“Don’t ask me about the attitude of these guys,” he said. “You still doubt what they have done. These players in the last years have won seven titles in the last eight competitions.

“Today after missing the penalty, see the reaction we had against an incredibly good team, not just for the (position) they are in in the table right now but they way the played in general this season.

“They have good central defenders, incredible full-backs and quality in the middle even with two important players out there.

“You see how quick they are with (Jamie) Vardy, Kelechi (Iheanacho), (Harvey) Barnes….It was an incredible test for us and good to play against these teams at the start of the Champions League (week). I’m so pleased for the victory and the way we played.”

Jesus was guilty of squandering a pair of superb chances in the 2-0 win over West Ham on Wednesday night but made no mistake here, snapping up his opportunity after Aguero had made it five penalty misses in the last seven taken by City.

“It’s not normal for the quality we have,” Guardiola said of that dismal record. “But I said to them, the next one we are going to score. The taker has to be convinced and say, ‘OK, I’m going to score a goal’ and then do it.

“I said the next time we’re going to score and maybe the the moment we need it the most we’ll score.”

The penalty came when Ilkay Gundogan’s shot hit the elbow of Dennis Praet as the Leicester man turned his back on play.

But it might have been a very different result on the night, with Leicester hitting a post through Vardy and seeing two penalty shouts waved away.

Brendan Rodgers admitted he had not got a clear view of the second of those claims, when City goalkeeper Ederson clattered Iheanacho as he narrowly beat him to a ball in the air, but had no doubt Kevin De Bruyne should have been penalised for raising his arms as he blocked James Maddison’s free-kick.

“We’re bitterly disappointed we didn’t take something from the game,” he said. “It was second vs third and I thought it looked that level of game…

“It was very clear we should have had a penalty. Absolutely clear, so not to get that was hugely disappointing.

“Their penalty was a penalty, Dennis had his arm in an unnatural position but it’s a great save from Kasper (Schmeichel).

“Overall we leave the game disappointed having given so much to it against a top-class team. We felt we didn’t get the rub of the green that would have seen us get something from the game.”

Iheanacho received lengthy treatment after being struck by Ederson, and was withdrawn at half-time.

“He felt a bit groggy at half-time and I always listen to my medical staff on that,” Rodgers said. “They felt it was hard for him to continue at that level.”