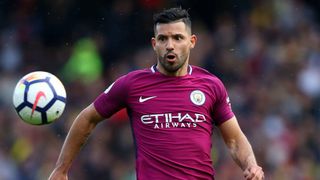 Pep Guardiola hopes Sergio Aguero can become Manchester City's new record goalscorer in front of his home crowd, but the manager also feels the striker should not be overly concerned with individual accolades.

Aguero needs three more goals to pass Eric Brook's record of 177 strikes for City, and the Argentina international, who netted a hat-trick against Watford last weekend, could achieve the feat by plundering another treble at home to struggling Crystal Palace on Saturday.

Addressing the media before the match, Guardiola acknowledged the Etihad Stadium would be a fitting venue for the long-standing milestone to be passed.

"The record is going to be broken, where, I don't know," he said. "Maybe at home would be better.

"I'm not thinking about tomorrow [Saturday] that he is going to score three goals, just that we score one, we win the game, the team plays good and we will have more chances.

"The focus is on playing good and if we play good, we will create chances to score goals. You have to provoke scoring more goals in the way that we play."

Aguero was not named among the 15 forwards on the shortlist for this year's FIFA FIFPro World11, which is decided by the professional players.

According to Guardiola, the former Atletico Madrid attacker has no need to be disappointed at missing out on selection.

"Always I encourage... my players... to fight for [the] recognition of his team-mates," he said.

"So the best present is when you have the feeling that the team-mates love you and you feel you have helped them.

"Recognition about the media and the prizes, that's OK for 10 minutes, and then after that it disappears. So he's not in the FIFPro this week, he will be in the next one. It doesn't matter."

Guardiola will go up against a former England manager when Roy Hodgson brings his Palace side to the Etihad Stadium.

RH: We need to take each game as it comes, cause the opposition as many problems as we can.September 22, 2017

The ex-Barcelona boss, though, appears to have no intention of following the veteran's example by moving into a nomadic career in international coaching.

Asked if he would consider an offer from England's Football Association, Guardiola said: "No, I don't know what is going to happen in the future. I never expected to be in Germany or here now in England.

"I think the national teams, especially the traditional national teams… in England, there was Fabio Capello and [Sven-Goran] Eriksson, but I believe the England manager has to be English and the Brazil manager be Brazilian, and Argentina an Argentinean.

"They know the feeling more and the media respect their own nationality more than the foreign guys. It's easier to settle, especially in the beginning.

"There are expectations. Anything can happen, but in my mind now I'm so happy at City."